Alex, my little brother, has always been one of those kids who knows what he likes. Growing up, Alex had a favorite type of toy, (tractors) he had a favorite type of dessert, (strawberry pie) and he absolutely loved the Arthur books. I used to read the books to my little brother all the time because they were books that I found entertaining even though I was five years his senior. Today, when I read them again, I still find that there is nothing more heartwarming than an awkward little aardvark with vision problems wearing a mustard yellow sweater and a bow tie. 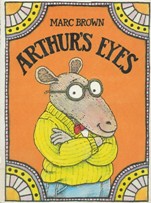 In the book Arthur’s Eyes by Marc Brown, Arthur battles headaches and he can’t read his book without sticking his long aardvark nose into the crease. He can’t see his math problems without help from his huffy classmate, Francine, and to make everything worse, he misses all of his shots in basketball. After Arthur’s parents take him to the optometrist to buy glasses, Arthur is happy because he can see. But then he goes to school. All of the kids make fun of him, and Arthur’s friend Francine calls him four-eyes. Oh the spectacle!

Arthur becomes self-conscious about his glasses and he starts to notice that no one around him wears glasses so he tries to get rid of his glasses by leaving them in the laundry or sticking his specs in his lunchbox. When the speckles Arthur accidentally walks into the girls bathroom and causes an uproar in the school, Arthur learns an important lesson about his glasses that is helpful to any kid struggling with their specs.

1. Some of the most respectable people wear glasses. When Arthur is in trouble for going into the girls’ bathroom, he has to sit down with the principal and his teacher– both who wear glasses. Arthur is pleasantly surprised. It might be helpful to point out people who wear glasses to your child. Especially people your kid looks up to besides mom and dad.

2. Arthur gets better grades and makes ten baskets in gym when he wears his glasses. Help your child see that the glasses are not there to make your child stand out in a bad way. The glasses are there to help them succeed and feel better about themselves.

3. In the end, Francine, who picked on Arthur the most, comes in with her own pair of fake glasses. Talk to your child about the real reasons that Francine made fun of Arthur out of jealousy. Why did Francine make fun of Arthur’s glasses and come in with a pair of her own the next day? Not because she thought Arthur looked silly, but because she wanted glasses herself.

And the top 3 most adorable things about Arthur’s Eyes:

2. The “Francine + Arthur” graffiti on the girls’ bathroom wall

3. The bear principal’s half moon glasses.

Sign up for free 30 day trial About The Reading Kingdom Become a Guest Contributor
Posting....