Full disclosure here: I am a die-hard Harry Potter fan. I was eleven when I first read the books and I always hoped I would get an owl telling me  “You’re a wizard, Stacie!” Or witch. Whichever. I would dress up for the midnight book releases and go to the bookstore– one time I was on the eleven ‘o’clock news wearing a full Dumbledore beard made of t-shirts and my mom’s periwinkle bathrobe because I won 2nd place in the costume contest. I was a huge Harry Potter dork back then, and I still am now—for different reasons. 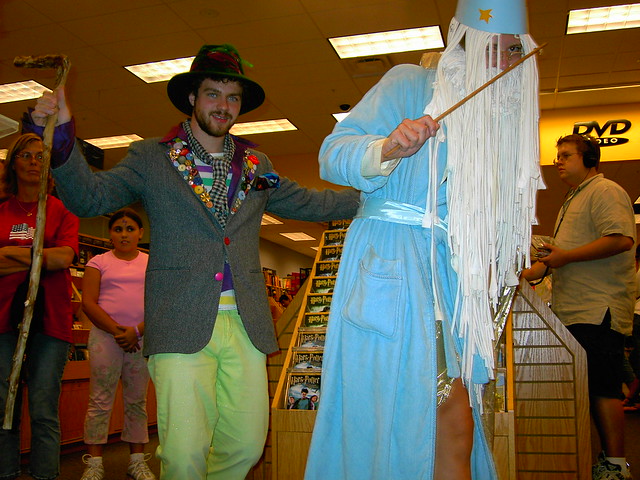 (The Harry Potter release party, my friend was Peeves the poltergeist.)

While I’ve been a Harry Potter fan for more than half of my life, I’ve been a glasses-wearer for longer. In the future when I am a parent, it is very likely that my kids will inherit my poor vision. And though  I feel it is becoming a lot more hip to wear glasses in today’s culture,  it still might come as a blow to some kids’ self-assurance.

As a kid, I was called “four-eyes” and  every other cliché insult that kids come up with on the playground but it never really bothered me. I believe this was the case partly because I thought my hot pink wire-rims were awesome, and partly because I was an obliviously confident tomboy who loved wearing basketball shorts to school. I just didn’t notice insults as much. I know a lot of my mental buoyancy as a kid stemmed from my exposure to confident, identifiable characters, like Harry Potter, who showed me that it was okay to have frizzy hair and “four eyes.”

It is undeniable that J.K. Rowling’s protagonists are wonderfully complex role models for kids to learn self-confidence and personal acceptance. Specifically, if your child refuses to wear their specs, Harry Potter can help kids learn to love their glasses by just being who he is. So for those kids whose insecurity is literally blinding them, here are 3 reasons that Harry Potter can help them overcome their glasses jitters.

1. Harry saves the wizarding and muggle worlds—with this glasses on.Unlike superman, Harry Potter does not take off his glasses when he becomes a superhero. Harry defeats the forces Voldemort and evil without changing his appearance a bit

2.Harry’s glasses show that it is okay to be imperfect. Throughout the series, Harry is described as “small and skinny for his age” with “knobbly knees” and “a thin face.” In addition to all of these qualities that make Harry, well, normal, he also wears round eyeglasses. Harry’s glasses and physical description shows readers that it is okay to be vulnerable and ordinary on the outside because it is the things on the inside that make people unique and interesting.

3.Harry doesn’t let his glasses define him. Even though we muggles see round specs and immediately think, “Harry Potter,” throughout the books, Harry never seems to notice his glasses, (Except for one time in the third book when it is pouring rain on the Quiddich pitch.) Harry never tries to fix his eyes with contacts, magic, or via muggle means. It is just part of who he is.


Book image from Barnes and Noble.

Sign up for free 30 day trial About The Reading Kingdom Become a Guest Contributor
Posting....